Call US 1-800-569-8411
Coronavirus Status: As of June 27, 2022 online orders will ship normally. Our local brick-and-mortar store is closed to walk-in customers. Please see our notice for details. 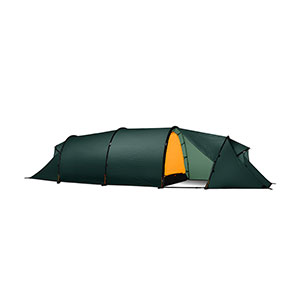 Images below are of previous version of the Kaitum 3 GT. 6' 2" model standing next to Kaitum 3 GT.  The Kaitum GT models use 4 poles for set up, 3 poles for the main area and 1 pole for the large vestibule area The rear of the Kaitum 3 GT features a smaller vestibule than the front. The rear vent and rear entry are the same as the front vent and front entry shown below. Side view the Kaitum 3 GT inner tent. The poles are feed through the elastic bands that usually connect the inner tent to the outer tent. 6 pole holders are needed to set up the inner tent by itself. 6'2" model sitting inside front Kaitum 3 GT vestibule. In addition to the front door, the Kaitum GT's feature a large side door, shown above fully opened and tied back. 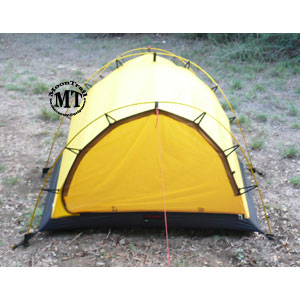 Front view of the Kaitum 3 GT inner tent. Red guyline can be seen in the photo above which is needed to keep inner tent erect. A guyline is also needed on the opposite door. Kaitum 3 GT inner tent with both doors fully opened offering maximum ventilation. The inner tent doors feature a fabric and mesh door, both opened on both doors in image above and stuffed in inner tent mesh pockets. View of the ceiling of the Kaitum 3 inner tent which features a draw string adjustment to keep the ceiling taut for maximum peak height. Vent on front or rear can be accessed and manipulated from a small zippered half mesh half fabric window from inside the shelter. The zipper flap of the front door can be seen above the vent, it is ¾" black strip that starts above the left part of the vent and covers the entire length of the front main zipper to the ground. The Hilleberg logo is on the zipper flap.